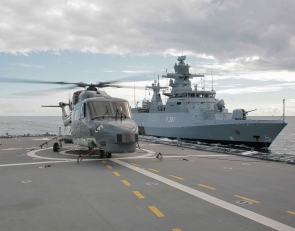 Maritime surveillance by resources of the Navy. | Source: German Army

Germany's maritime security is an important aspect of an overall national security concept. It can only be achieved and guaranteed over the long term by a close interdepartmental and multinational cooperation. By monitoring the sea, the German Navy makes its contribution within the given constitutional framework.

With its helicopters, the German Navy participates in the national Search and Rescue (SAR) service. The SAR operations are directed and coordinated by the Rescue Coordination Centre (RCC) of the German Navy Headquarters. The cooperation with the Maritime Rescue Coordination Centre (MRCC) of the German Maritime Search and Rescue Service (in Germain: Seenotretter) and the Central Command for Maritime Emergencies is a well-established and efficient mechanism with clearly defined interfaces and responsibilities. 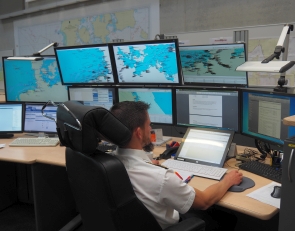 A naval officer at his workstation at the JERACS. | Source: Administration Department of the MSSC

Based on serveral bilateral administrative agreements, the German Navy also supports its partners in conducting transports by sea and by land as well in oil surveillance and oil spill control activities. For this purpose, the oil recovery ships and the DO228 sensor aircraft assigned to the Central Command for Maritime Emergencies are used by the German Navy. The daily surveillance flights of the DO228 aircraft over the North and Baltic Seas are an important contribution to keeping the German coastal waters clean.

The Naval Headquarters are the main contact for the Central Command for Maritime Emergencies concerning any requests for personnel or material support and work to be carried out by the Federal Armed Forces. These also comprise well-established mechanisms and processes employed outside the structures of civil-military cooperation.

In addition to the maritime security tasks described above, there are of course many more interesting things to learn about the German Navy.